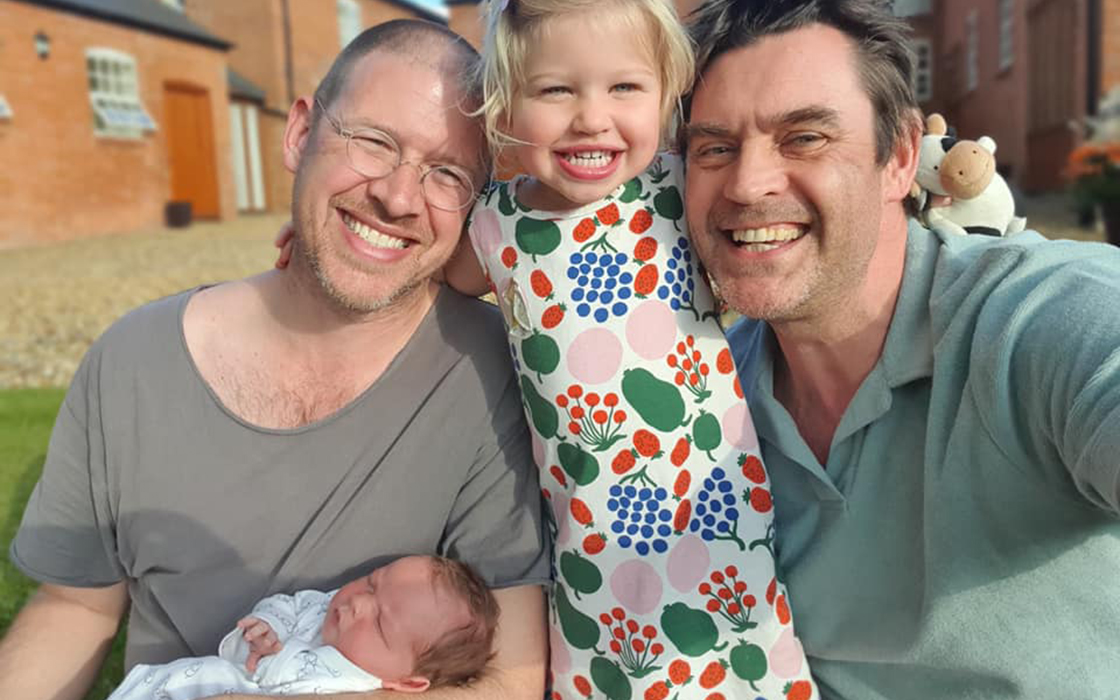 On Monday 1st June, at 38 weeks, and the day the boys were moving up from Brighton to a nearby rental for a month, my midwife sent me for a presentation scan as ‘Pebble’ was still not head down. It is called an ‘unstable lie’, where basically the baby cannot decide which way up he wants to be and is doing a great impression of an acrobat! The sonographer called a doctor who said he wanted to do a section the very next day. In complete shock, I asked if we could wait a few days, to which he replied, “Yes,” but he wanted me in hospital as, if my waters were to go, it could be very dangerous.

Cue a week in hospital, which wasn’t actually that bad. It had been agreed that we’d wait until Sunday and then make a decision, so I spent the week reading, chatting to fellow inmates (as I called them), having sneaky outside visits from Steve and Alan, and keeping the surros entertained with my daily updates of the antics on ward 24. I sent a few to Alan who said I could give Adam Kay a run for his money!

On Monday 8th June, I was summoned to the labour ward – meeting Steve there. A doctor and a registrar desperately tried to break my waters but my cervix was posterior and therefore my body just wasn’t ready. Given that I’ve never gone into natural labour before 41 weeks, I wasn’t surprised when they said it would have to be a section, but I was still heartbroken and I’m not ashamed to say I had a little cry. I’m convinced that, if only they could have left me for a couple more weeks, it would have been the natural labour I wanted.

The theatre experience itself was very relaxed. A midwife kindly said she would take a few pics from behind the screen, and also invited Steve to video Pebble having his first checks, being weighed etc, which (whilst still being stitched up) I immediately sent to the boys… they said it was just like actually being there. I asked someone what the baby weighed and was given the answer in grams, to which my response to that was, “What’s that in old money?”. He was 7lbs 11oz, so not small, but tiny compared to the toddlers I’ve previously given birth to.

The other part of this birth that had left me heartbroken was that we had been told that I would only be allowed one birth partner and only one IP would be allowed in once I was ‘stable’ to care for the baby. Once I was wheeled into recovery, however, the midwife said she wasn’t happy with that and told me to get both of them to come over. I will be forever grateful that I got to see both of my boys meeting their baby. We had a lovely hour in the recovery room together before Steve took Al back to their rental and Alan was taken to the labour ward where he was to spend the night with Otto.

I didn’t think I’d see them again until we were out of hospital but I managed a couple of visits before we were (separately) discharged the next day. I think it was around 2pm for Alan and Otto and 6pm for me, when Steve came to pick me up. It had been so strange being in hospital without him – strictly no visitors at any time. There will be another post coming very soon about surrogate partners!

Now, just 40ish bottles of wine in the house to make a start on!

This site uses Akismet to reduce spam. Learn how your comment data is processed.